I watched a TV documentary yesterday about the founders of a social company recycling old furniture and objects they collect at people homes https://www.laressourcerie.be
The company is growing, now employing 40 people among which a number of handicapped people. « We’re not a non profit business, but we bring value to the community and the community is giving back to us » said the owner and he went on : « a few years ago, people were saying I was outdated, now they’re saying I’m fashionable ».

Is caring about people needs some kind of fashion ? No ! Actually that’s at the origin of craftmanship and trade. When money became the moto and when the profit of some became the only reason for doing business, industry started creating pseudo-needs. It took gigantic proportions with the development of the market economy. It reached a point where marketing is perceived by most people as a tool invented to manipulate masses instead of a way to bring value and satisfaction to customers.

Now is the time to come back to basics an reinvent business and marketing. The excesses of mass marketing not only did not generate happiness (at most it created comfort) but it devastated our planet’s resources. Look at the terrible « visual pollution » created by generalization of shopping centers on the outskirts of cities. The « all for money » principle led to a perverted society that lost its human values and promoted all forms of violence as a way for our youth to find some sense of life

Happily mankind has its good sides ! Civilization is when human beings’s good sides dominate the bad ones. And, as a witness of young future leaders today, I can see new ideals and new values emerging making me very excited about the future. I’m watching young entrepreneurs with a healthier business philosophy who see profit as the outcome of value creation instead of the result of some kind of customer manipulation. They understand that the most value you create, the more sharing you can do. And they care for sustainable social value as much as their own pocket.

Years ago, we were teaching that the purpose of business strategy is to generate a long term sustainable flow of profit. Today, we preach for the triple bottom line paradigm https://profbaeyens.com/2016/04/07/do-you-think-about-your-triple-bottom-line/ It leads to more competitiveness while bringing a brick to the wall of humanity. Because who are entrepreneurs but the builders of the future ? And who are we, professors, but messengers of hope ? 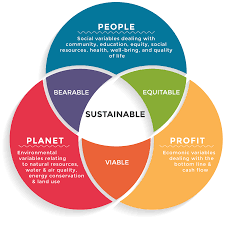